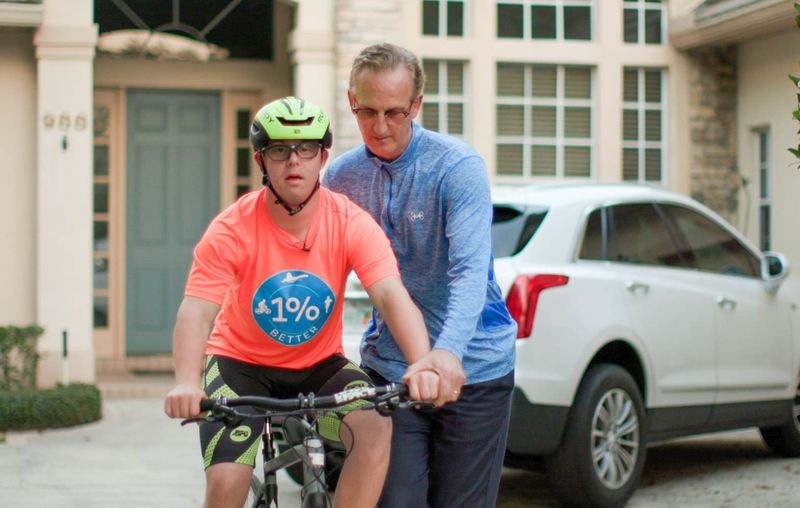 It is January 26 — officially, “Chris Nikic Day” in the city of Maitland — and the honoree is chilling poolside at his family’s home, plopped in a deck chair, leaning back, his fingers laced behind his head. He’s tanned and rested and smiling. Life is good when you’re a 21-year-old global phenom.

Since last November, when Nikic became the first person with Down syndrome to conquer an Ironman triathlon — the 2.4-mile swim, 112-mile bike race and 26.2 run considered the toughest single-day athletic challenge — the world has beaten a path to his door.

Now there’s a book deal in the works, a shoe deal, a documentary that aired on NBC in January and a new bike sponsor, no small matter when a top-end racing steed can run upward of $10,000. There’s been a string of requests for corporate speaking engagements and philanthropic appearances. Two weeks ago, his dad finally hired a media manager, in part to keep his son’s 108,000 Instagram followers engaged.

Oh, and there’s a new Chevy Equinox parked in the driveway — a gift from a fan who happens to own a car dealership.  Nikic is working on getting a driver’s license.

He’s also a finalist for the Orlando Sentinel’s 2020 Central Floridian of the Year, nominated for bringing a badly needed dose of inspiration to a historically wretched year.

At Ironman Florida, the Panama City course where Nikic raced, “Random people would just walk up with tears in their eyes and ask if they could give him a hug,” says Nikic’s race guide and training partner, Dan Grieb, a Central Florida real-estate agent and Ironman veteran. “Everybody there knew who he was…It has been magical.” Or, as Nikic himself explains, “People say I’m their hero.”

From his lips, it is not bragging; it is simple honesty. Nikic has become a symbol of hope not only for parents of children with Down syndrome, but for anyone whose potential has ever been cut short by someone else’s low expectations. His is a story of astonishing perseverance, inclusion and defying all odds.

Though Down syndrome is largely thought of as an intellectual disability, there are common physical problems associated with the genetic condition. There can be heart defects or digestive abnormalities, a tendency to develop chronic respiratory and middle ear infections, recurrent tonsillitis, low muscle tone, hypothyroidism and an increased risk of leukemia and Alzheimer’s disease.

Chris Nikic had his first surgery, to repair two holes in his heart, at 5 months old. He still needed a walker at 3. He attended seven schools from kindergarten to fifth grade, when his parents finally found a small private campus willing to take an inclusive approach. His mom, Patty, also spent two years home schooling him. “Lots of people told me what I couldn’t do,” Chris Nikic says. “It’s hard when people are told they can’t do something. But we don’t tolerate that.”

He began splashing around as a kid in his parents’ backyard pool, but as a teen he was forced to stay out of the water after four surgeries in two years to reconstruct his ear canals. When he restarted, he could barely swim a single lap or run 100 yards without stopping. Yet in January 2018, his dad signed him up for a newly launched triathlon program through Special Olympics Florida. “He had gotten pretty sedentary, gained some weight and was becoming pretty socially isolated,” Nik Nikic says. “So that was our starting point.”

When Chris Nikic began talking about becoming an Ironman before he’d even done a sprint triathlon, the two began to map out a training plan. The learning curve was long, especially for the bike, which required an elusive sense of balance. There were a few spills — nothing too series — but unending repetition of the work. Chris Nikic aimed to become 1% better each day, a mantra his dad, who owns a sales consulting business, uses with clients.

In 2½ years, Nikic went from his couch-potato former self to putting in 100-mile bike rides and 18-mile runs in a single weekend, swimming nearly 3 miles at a stretch, lifting weights and doing mental exercises to learn to push past pain. Some of his long runs meant spending four hours or more on a treadmill.

For the Ironman, he would need to stay tethered to Grieb, the guide he met through Special Olympics, throughout the ocean swim, which is often chaotic and disorienting. And he would be tethered again for the run, so he could follow rather than navigate the course. “I’m not pushing or pulling him,” Grieb explains. “He has to do all the work.”

And on race day, like all the other competitors, he had to suffer. At mile 40 on the bike leg, stopping to gulp down some Gatorade, Nikic accidentally stepped on an anthill. “I had dozens of ant bites,” he says. “Bad ants. They started at my ankle and they went up. They got into my private parts.” Ten miles later, he crashed, bloodying his knee. Grieb washed off the wound and they kept going.

Halfway into the marathon, though, Nikic wanted to quit. “I was tired, exhausted, in pain,” he says. Grieb knew what he needed. Dad.

Nik Nikic met them on the roadside. The pain, he said, was “fake.” It was an illusion meant to steal the dream of finishing. “God sent angels to take care of my son,” Grieb remembers Nik saying. “And I’m going to let the angels take care of him.” “See you at the finish line,” Chris Nikic answered. As he started again, Grieb counted the orange cones that lined the course. Run for 10 cones, walk for two. Repeat.

At 16 hours, 46 minutes and 9 seconds — barely 14 minutes inside the 17-hour cutoff time for the race — Nikic ran across the finish line, his arms raised in triumph, spectators watching a livestream feed from around the world. “Chris Nikic, YOU are an Ironman!” an announcer shouted.

He would shower, drink a beer, chow down at a Waffle House and go dancing at a nightclub with fellow finishers. He would love every minute of it.

And a few weeks ago, the Ironman organization issued a special invitation for him to do it all again — this time on the sacred triathlon grounds of Kona, Hawaii — at the Oct. 9 Ironman World Championships. The course will likely be windier, certainly hillier, perhaps hotter. It will mean training longer and harder.

Chris Nikic jumped for joy when he heard. His dad cried.

“When we go back and look at how we reacted to the news that we got when Chris was born — we were devastated,” Nik Nikic says. “We know other parents feel the same way.  So what Chris is doing is liberating millions of parents out there, right from Day 1, giving them hope that their children can do amazing things.”

He pauses. No, it goes beyond that, he says finally. “I think God uniquely picked Chris to help people look inside themselves,” he says, “and realize they can do more, too.”