Special Olympics spreads compassion and acceptance in a way that can unite the world. Our goal is to awaken everyone — and every community — to each person’s common humanity. Understanding brings acceptance; acceptance brings peace. This vision of inclusion starts at the local level and expands worldwide.

The Local Hero Award was created to celebrate remarkable individuals --inside and outside -- of our organization whose actions inspire a more accepting and inclusive world for people with intellectual disabilities.

Congratulations to our heroes making a difference in our communities!

Like many people with intellectual disabilities, Samantha was never expected to become an elite athlete. Diagnosed at the age of 2 with autism, doctors said she might never walk and almost certainly wouldn’t play sports.

Samantha and her mother, Karina, took note of those opinions and set about proving them wrong. Samantha received intensive therapy and, over time, her balance improved. She joined Special Olympics Florida and learned to swim.

She began attending road races with Karina, an accomplished long-distance runner. Somewhere along the line, Samantha decided she wanted to begin running with her mom, so the two began training. It was hard, she said, but running “made me happy.”

She started with short distances, gradually adding mileage and racking up ribbons. In early October 2021, Samantha completed a virtual Boston Marathon –- 26.2 miles. A month later, she headed north and ran the New York City Marathon, becoming the youngest woman with autism to finish the race. The London Marathon is next on her list.

For her courage and determination, Special Olympics Florida is honored to recognize Samantha Rodriguez as a Hometown Hero.

Check out the media coverage of our 50th Anniversary celebration where Samantha received her award: 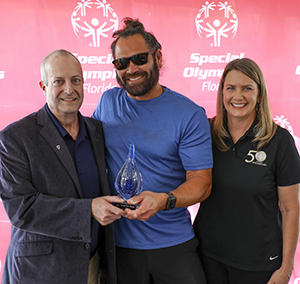 Since 2013, Pete Chiaravalle has worked tirelessly to engage the Knights of Columbus with the mission of Special Olympics Florida.

Under his leadership, the Knights have sponsored our bocce program and participated as Unified partners. They’ve also created a statewide competition to see which region can raise the most Polar Plunge money each year.

Check out the media coverage of our 50th Anniversary celebration where Pete received his award: